The Good Doctor so patiently waited for me to have enough time off for us to both laze in bed all day and binge-watch House of Cards. That’s love, folks. But, since the rest of you probably have lives and have already watched what you want of this most recent season of HoC, I figured I’d take this opportunity to crawl out from under my academia rock and join the Netflix masses in the real (read: virtual) world. Spoilers ahead, but what do you care.

While I love Frank’s Blanche DuBois accent portrayal, I’m still never sure where he is meant to hail from based on his choice of dialect. The south has many different accents. Just ask us. 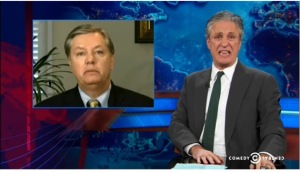 Oh shit, I totally forgot how the last season ended…but I do remember that this bald dude is way creepy. Thank you, diegetic music, for the reminder.

Why does Robin Wright have Justin Bieber hair? Was it always this severe? Whatever, she rocks it.

If a former alcoholic takes a literal “shot” of whiskey, does a member of AA lose his chip?

This show is both literally and cinematically dark. I get it. Just let me see the set, JESUS.

God Bless Claire Underwood for her incomparable ability to fuck people back to life. Not figuratively.

Every time I hear this theme song now, I envision a group of violinists spastically trying to keep up with the music until the oboe comes in. Oboe always wins.

As a gift, the American president just offered the Russian president a surfboard with the lyrics of “Back to the USSR” by the Beatles written on the back. Epic. 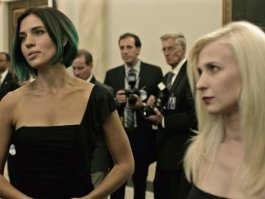 What’s even more impressive than the independent conniving of Frank and Claire Underwood is the tact with which their plans seamlessly work together. It’s oddly/scarily satisfying.

Woops, I zoned out. Did he just spit in Jesus’ face? I think Jesus was so upset that his effigy committed suicide…. Alls I knows is that my butt is numb. I think it’s time for a break. Gym time!

Welp, (mentally) back in a jiffy!

Why don’t the Underwood’s sleep in the same bedroom? I just saw her bangin’ her husband on the office floor. She’s using sex as a manipulative ploy? JUST LIKE A WOMAN, wait…

The President just took down FEMA for his own gain in a manner that just made every former POTUS splooge their pants.

Finally, they’re smoking their cigarette. I was wondering how long this season would make me wait for their faux-post-coital-evil-scheming cigarette

Did Doug just use the Liam Neeson “I have a particular set of skills” line alluding to politics? That…well, no, that actually works. 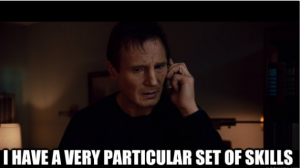 The way Claire Underwood emasculated the Russian Ambassador by legit peeing in front of him – I’m not sure what purpose it held, but I loved it.

Frank’s gonna ghost write his novel? With the dude from Boardwalk Empire? You can’t trust a man that looks that much like a weasel.

Spy dude pretends to have HIV to get private information from a chick in AA who recently lost the love of her life? Fuck man, TV DC is the breeding ground for the most evil of people.

Shit just got really real when the gay dude in the Russian prison killed himself while Claire Underwood took a lil prison nap. The kicker: with her scarf. Pretty sure he can keep it…

When Kevin Spacey gets mad, he loses his southern affected accent. Where does it go? Nobody knows!

They’re doing that time comparison framing device thingie, where ‘now’ is the past and the future is one month from now. Thank goodness Claire changes her hair color, otherwise I wouldn’t know when was now and where is then!

Frank and Claire are mad at each other purely for having morals. They would.

Sweet Jesus, did we really think we were going to watch a whole series in one day? My brain already feels exhausted – you can’t even blink during this show, you have to Clockwork Orange style hook your eyelids open and WATCH. I need to move my limbs and shit around. I’ll just…leave it on in the background. 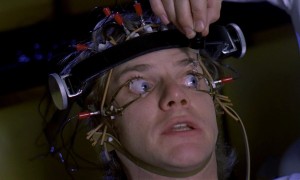 With a nice glass of milk.

Truth is – we did finish the entire series. Well, The Good Doctor finished the entire series; I fell fast asleep about a half hour before the end of the last episode, and when I woke up, he immediately told me everything that happened and ruined the whole fucking thing for me. Great. At least I didn’t spoil the whole thing for you, and no one would or should possibly sit through 13 episodes of me droning on, so consider this a lazy (wo)man’s teaser. Happy Staycation to me! This is Kitty, signing out.