So…2014 is coming to a close.  And if you’re at all like me, you’re interested in all the top ten lists, especially for video games (here’s a really neat one).  This year has not been the best for gaming, what with all the controversy.  Or for me personally.  BUT there has been a bright spot: I have found the game that I have been questing for my entire life.  So instead of a top-ten list like how everybro is doing, I’m going to tell you all why you should pick up this free to play game RIGHT NOW if you have an Apple device.  There is a fee of $2,99 for an expanded online experience which is COMPLETELY worth it, especially after playing around with the base game.  I present to you… 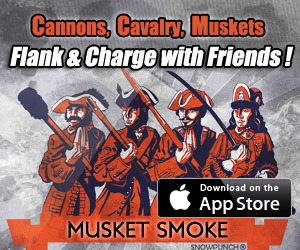 MUSKET SMOKE is a competitive, turn/hex-based semi-abstract tactical wargame set during the Age of Pikes and Muskets.  The game is played in matches.  Each player starts by building an army out of five unit types: pikemen–fast melee infantry with an advantage against cavalry, musketeers–who can do more damage than pikemen and have a ranged attack but are much slower, cavalry–who can charge across the battlefield and annihilate other units but has less health, and cannons–who can shoot halfway across the map and cause serious damage, but have low health and are very vulnerable to melee and cavalry.  One unit of each type can be given “confidence points,” which provide a morale and melee damage boost.   Victory goes to the player who captures the enemy’s command post and/or kills or routs up to ten units. 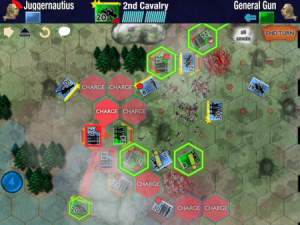 Well, perhaps the most important part of Musket Smoke is that there is very little pure luck involved.    When units engage in shooting or melee,  damage is not randomly determined, as it is is SO many strategy games, but is always fixed based on a wide variety of factors: unit size (both attacker and defender), attack type (melee, shot, change), morale (three morale hits cause a standard unit to rout), the presence of gore (yes!) and, most critically, whether or not a unit is “melee-locked,” that is, already engaged in melee combat with another unit, allowing for sweet, juicy flank attacks that devastate both men and morale.

Here’s a bit of an explanation:

A match  of Musket Smoke should not be a slugfest: if it is, you’re doing it wrong. Trust me on this one.  I’ve lost far FAR many more matches than I’ve won, and I loved every minute of it!  The game is very much a test of skill, in planning, execution of maneuvers, and manipulation of multiple factors–most importantly your opponent’s mind.  I’m not very good at these things, I’m first to admit.  But I am willing to learn, and the short matches encourage experimentation, as does a very friendly international online community.  Individual turns are asynchronous, meaning you can leave you game and continue with your life and come back when you please with a crazy new way to escape the mess you found yourself in. 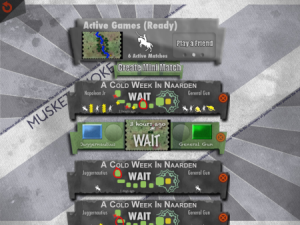 The match lobby, waiting for your enemies to finish their battle plans, which are, of course, vastly inferior to yours 😉

But you may be asking yourself, “what makes this all so special?”  After all, you can shoot, flank and charge in Total War games, whose success was built on online battles just as much as in their campaigns.  Hex-based wargames with complex but skill-based battle mechanics have been around for decades.   But what developer Woodie Dovich has done here is to combine the seemingly-diametrically-opposed worlds of online competitive multiplayer and historical turn-based wargaming.  He has made hardcore strategic wargaming truly approachable, competitive and, most importantly, fun!  When you pull off a successful flanking maneuver, or charge, or cannon shot that blasts your enemy’s troops to bits, you feel like a total badass—the second coming of Napoleon–or rather Gustavus Adulphus or Oliver Crowell to be more period-appropriate. 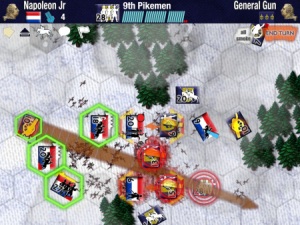 Woodie gets perfectly the sometimes-nebulous concept of “gamefeel,” the visceral sensations that underline and reinforce gameplay.   Gamefeel is more present in other, more-action-oriented genres like platformers and shooters, so taking such an approach to tactical turn-based strategy was a fantastic and unique approach that stand shoulder-to shoulder with it’s hour-to-learn, lifetime-to-master gameplay.  Musket Smoke, then, for its simplistic, rough-around the edges presentation, is more innovative than the VAST majority of games produced this year, Indie or AAA alike.

Which is why it’s such a shame that this game, which has been out for over a year now, has received so little attention!  That this amazing piece of work is lost amidst the sea of samey strategy shovelware on the app store is enough to depress anyone.  I only found out about it through the website Pocket Tactics.  It’s expanded release onto iPhones should help boost its popularity.  The touch interface definitely makes Musket Smoke shine.  But expanding onto other platforms, such as the cheaper Android and especially Steam would only help snowpunch promote its games.

Fortunately, there’s a sequel coming out.  And from what I’ve seen on the website, it’s gonna be AWESOME!

And if you’re looking for people to match with, do check out the facebook page.          (FULL DISCLOSURE: Adminned by yours truly)