Whats It’s Like… Vol XI The Shmafrican adventure! or I HATE baboons!

So here I am, continuing the great Shmafrican adventure. Like the great Private Joker before me, I have come to far away lands to meet new and interesting people… and kill them. Just kidding. I’m not doing much of that these days. I am, however, meeting many new and interesting people. The people here are very distinct in their appearance. The women wear the flowing wraps, robes and headscarves of Islam, but unlike Afghanistan, where the women are mean, evil, shrieking harpies garbed in all black up to the eyeballs (so that it looks like a football team of Batmen coming at you), the women here show their faces and wear bright, colorful robes and are generally very kind and polite. They smile and say hello and do not avert their eyes from a man’s gaze. They tend to have puffy cheeks and delicate little mouths that make them look like porcelain dolls. They speak fairly good English and very good French. The men, however, are like Afghans. They are skinny and shifty and always trying to take something from you. They are skeletal thin and have very weak chins usual supplemented by a scraggly goatee. They like to try and joke with you and build a rapport only to ask you for your watch. Same shit, different continent.

Out in town, they all hang out in the street and in doorways and come out even more at night when the baking sun has retreated and the heat is more bearable. Also out in the street are baboons. These aren’t cute and cuddly like in Aladdin (and yes I realize that was a capuchin monkey not a baboon, so fuck you before you get smug). These are evil, bare-assed scavengers who will steal your fucking Gatorade and not even care. The little bastards travel in packs of about a hundred which makes me have flashbacks of the movie Congo and grip my pistol a little tighter. I swear I’m going to kill one of these fuckers if he crosses me again. You guys want some monkey slippers? I can make that shit happen. I am INCLINED to make that shit happen. I just WISH a motherfucker would!

I call him Furious George.

Sorry. I blacked out and came to sharpening my knife. I’ll be ok. What was I talking about? Oh yeah! The abominable fauna here. Well aside from the people and baboons are camels and goats in the middle of the street that you have to dodge on blind curves in the hills which is super swell since you have to drive a million miles an hour and lanes are a vague suggestion. They roll 18-wheelers here like it’s their job and then just leave the containers on the side of the road to be pillaged at will. Usually it’s something like a truck full of windshields or something and never anything fun like a liquor truck or REALLY interesting like a truck full of chickens.

They also chew a leaf called khat. If you ever read Blackhawk Down, you know about this stuff. It gives you the same effect as cocaine and they people spend most of their income on it. It’s pretty strange seeing a rundown village/shanty town and then a guy sprinting shirtless down the street waving his arms high as fuck yelling “I love KHAAAAAAAAAAT!” 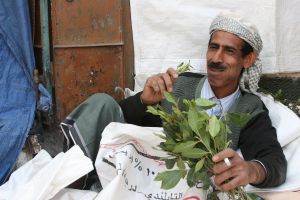 Khat is a hell of a drug!

Well, that’s it for now, dear readers. I’ll let you know if I find Kurtz up the river but until then, enjoy ‘Murica and the freedoms that I’m out here not getting laid so you can enjoy.