Unlike the last time I tried this “recco” wasn’t something the internet recommended, but rather it comes from a storm that had been brewing since 1999, when the longstanding cartoon family of my childhood, The Simpsons began sharing a network with The Griffin’s:

The two shows have always taken jabs at each other, and they have always been fun to see, such as throwing Peter in a group of Homer Clones: 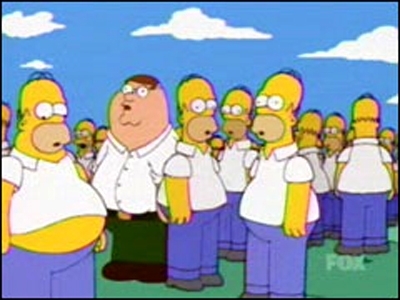 To running Homer over during a Naked Gun-parodied intro:

It looks so weird…

To throwing Peter in an “Italian” Lawbook:

This rivalry between the two shows had varying degrees from playful to downright lewd, but a crossover seemed inevitable:

Though I can’t remember anything about it other than the fact that it exists, the Jetsons/Flintstones crossover actually seemed to have a plot.  Where the Simpsons/Family Guy crossover fails is that looms threads of potential, but never hems them in any coherent way, then instead ditches the plot in the third act to give us a Peter vs the Evil Chicken fight, replacing Chicken with Homer.

This comes as a surprise given what preceded it, which — did I dare say– had potential.

Once the Griffin’s make it to Springfield the episode takes us on a tour, and reminds us of what made The Simpsons so great. 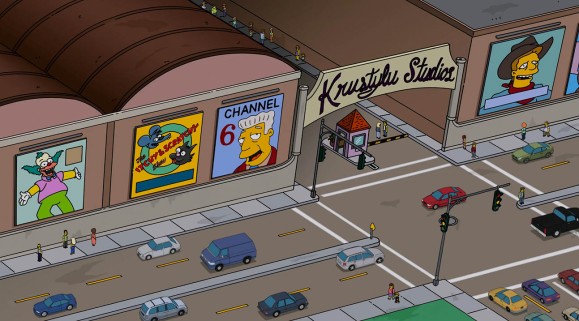 The crossover absolutely does its Simpsons fanservice.

Though this scene gets a little weird: 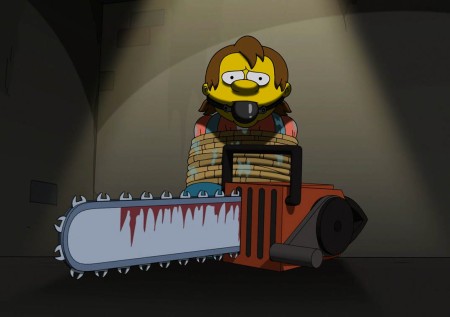 Also this.  This gets weird.

The best stuff from this episode comes during the scene at Moe’s Tavern when the conversation becomes very meta — the characters speaking in thinly-veiled metaphors about their shows.

“It may have been inspired by Duff, but I’d like to think it goes in a different direction…”

It is all very on the nose.  And incredible. 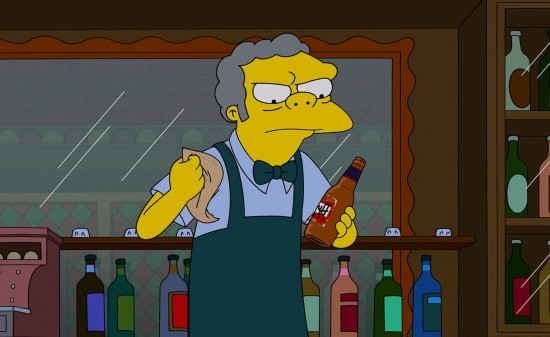 “Your livelihood is based on fraud.”

Resulting in a courtroom verdict, a scene that shines all the more glorious for its brevity…

Is it too much to ask for one Jay Sherman?

….as the timing from Moe’s to the end of the courtroom scene is four minutes.

Pitting the two families against one another was a great idea that was executed poorly here.  If you shave off the first six minutes-bullshit of Peter drawing cartoons and cut the entire Chicken fight there is enough time to develop more conflicts, such as Brian losing the Simpson’s family dog, or Meg being a better saxophone player than Lisa:

A smarter writer would raise the stakes, having everything come full-stop in the courtroom scene, but all of the potential just doesn’t go anywhere.

The four minutes’ worth of decent writing gets lost in the uneven shuffle of the episode needing to be funny every 5th or 6th sentence.  Instead of being genuinely clever the show chooses to aim low and give us the Ultimate Showdown that we never asked for.

It is a nice action sequence with great cameos and easter eggs, but though it does decimate the town it doesn’t break any new ground.  The final act has wallowed to nothing more than a recycled joke.

They might as well have had Maggie shoot Peter.

Nothing sucks more than missed opportunities.  The Family Guy/Simpsons crossover had a lot of that.

But hey, I tried Internet.  See you at the Futurama/Simpsons one.

Welcome to the Weekend.

And if you’re going through it, have an easy fast.