So it turns out, most of the predictions I made last week were eerily accurate. Right down to the General Westmoreland story. Oh Phong Luc, what a storyteller that fellow is. Great comedic timing. And it’s nice to know that my precognitive powers are growing stronger, bringing me ever closer to the day when all will bow in trembling fear as I crush my all who dare oppose me with my mind.

But enough about how great I am and what the design for my Imperial Standard should be. I’m going to take today’s post and use it to pass on the facts I learned about Quebec in my travels. Exciting, right? RIGHT? Of course it is! And, even if it isn’t, don’t worry. There’s really not much to learn about that place. It’s not like it’s America or anything.

As always, Ron gets it.

The History of Quebec

In the entire recorded history of the city only five things ever happened. I know this because every single tour guide we listened to mentioned each of them at least once. Sometimes twice. And while wearing a feathered tri-corner hat.

That’s it. Nothing else happened there, or has at all since Churchill undoubtedly horked up six pounds of crepes in some bathroom at the Chateau Frontenac. Perhaps even one I used myself last week. History coming alive!

It’s like I’m back in ye olden times as we speak!

Also, Alfred Hitchcock filmed I Confess there in 1953, but I never saw that one so who gives a shit.

Imagine if Seattle and Vermont had a baby. There you go.

They’re pretty swell. Much nicer than those assholes in Montreal I’ve dealt with more than once. Very helpful and accommodating. Probably because without tourism, they wouldn’t have dick. As my wacky Uncle Derek so aptly pointed out, their major export seems to be dreary street music. You know, the kind where it’s just one somber, chilly person playing a single instrument along with a recording. It was like the soundtrack to a horror movie where the killer turns out to be the horror within us all or something stupid. The locals are also mostly in terrible shape, which is impressive given how hilly the city is.

Staying fat in the face of endless staircases takes serious dedication. And cheeses.

On top of that, the citizens are not much to look at. Though, given that the city seems to be awash in an endless wave of older tourists, mostly from the cycle of cruise ships that stop their almost constantly, there could be some hot locals buried underneath the hordes of people with fannypacks full of Dramamine and orthopedic shoes.

That’s in Alberta, dummy. Try to keep up.

Butter. Everything has butter. So much butter. It’s tasty as hell, but Jesus Damn Christmas, mon amis, take it down a notch. Still, it’s all pretty damn delicious. I’d go into the details of the specific meals I ate and post a bunch of photos of the food, but I’m not the kind of insufferable dickbag who takes pictures of their meals for other insufferable dickbags to gawk at with slack jaws and dead eyes. So here’s a picture of my Uncle Derek fondling a fresco in one of the restaurants we ate at:

Some people have drunken uncles, some have funny uncles, and some have creepy uncles. I have all three in one. Jackpot.

Though I will mention that one night I ordered what it seemed, on the menu, would be a crazy, complex concoction of piglet and unpronounceable sauces. Then they brought out a skillet of pork and beans. Seriously. A plain, ol’ metal skillet with beans, sausage, and a hunk of cooked pig. Granted, it was the best damn pork and beans I’ve ever had. But come on, Quebec, who are you trying to fool here?

So, that’s Quebec City for you. I know, I know, you’re inspired to go visit and see the river begin to gradually ice over for the next 9 to 34 months (the average length of Canadian winter). I say go for it. And, while you’re taking the slow sightseeing boat from the dock out to that one bridge and then back to the dock, do think of me and my kind, magnanimous guidance. Because, if you don’t, I will explode your thoughts with my mental powers. Or at least get Uncle Derek to leeringly photobomb all your touching snapshots. He’s uncannily good at it. 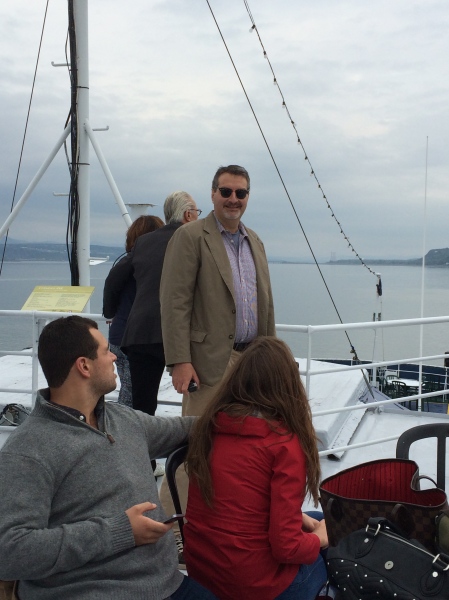 I am not the only one in my bloodline with mysterious powers.

By reading this blog, you legally forfeit your right to cry, eat tofu, or watch movies where people kiss in the rain and sh*t!
View all posts by Paul →
This entry was posted in 'Merica, Canada, Drinking, Famous People, Historicalities, Paul is Grumpy, Travel, Ugly People. Bookmark the permalink.