I feel as though it is my duty as the only female contributor (so far) of the male dominant BroCast line-up to occasionally explain why women do. Today, I will attempt to explain the reason why we [note: us = women and gay men] are addicted to the mind-numbing uselessness that is The Real Housewives franchise.

This is Andy Cohen, it’s all his fault, and this is to whom you can send your hate mail.

It all began on March 21, 2006, when The Real Housewives of Orange County aired. The only premise was that a gaggle of rich women – not even necessarily or technically “housewives,” the only caveat being that they are stupidly wealthy – were paid to let a film crew document their every waking, breathing, complaining, pointless moment. The ladies chosen for the show are unnaturally forced to mingle in social situations that will inevitably lead to in-fighting and bitchiness. I mean, who could ask for more? All of you, by the way. All of you should ask for more.

This is their “job.” They get paid for this. What are we doing with our lives?

This show became so ‘popular’ that it led to the creation of two more branches of its pitiless existence in 2008: The Real Housewives of Atlanta and The Real Housewives of New York City. New Jersey was added in 2009, followed by one infamous season of DC in 2010, and Beverly Hills and Miami were soon to follow. This franchise has also reached international interest, as the Real Housewives of Melbourne, Vancouver, and Athens have all now reared their ugly heads.

The Real Housewives of NYC go to Morocco: WHEN CAMELS ATTACK

Just so you’re aware of how awful this all is, here is the intro to the most recent season of The Real Housewives of New York City. The taglines are just…everything.

OK so enough of the shit you don’t care about, and on to more of the shit you don’t care about. Why do I watch this? And, let me tell you, I watch ALL OF THEM. I only just realized while “researching” this that there was a season done in Athens, and I am desperate to find out where I can watch this. But WHY?! Why am I wasting what brain cells I have left to watch most assuredly the worst reality television that has ever been or ever will be? The answer is twofold: I can’t help myself, and, I want to judge people. I want to see these women fight, act insane/stupid/insanely stupid, spend unreasonable amounts of money to look pretty/younger/important, and pretend that their lives have meaning. And I want to see it done in multiple cities, at different parties, with slightly altered versions of these women. I want to, as Bravo puts it, “watch what happens next.” I have no desire to know what parts of the show are true or not. I don’t follow up with the faux existence of any of these characters in magazines or online. For me, these women only exist in the tini bubble that is my TV screen, and they exist for the sole purpose of my entertainment.

OH YES YOU CAN. And you will. MUAHAHAHA

Sometimes the story gets so outlandish and ridiculous that it just feeds my addiction more. One of the real husbands hangs himself in the bathroom after his wife gossips to too many of their friends about how he made it rich? And this husband used to physically beat the wife who looks as if she is one surgery short of having a zeppelin face? 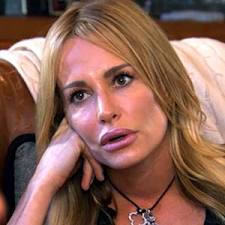 Another housewife admits that she was abused by her father and fakes having a PTSD-like flashback just to avoid going camping with the rest of the cast? One of the husband-wife pairs gets caught for embezzlement and tax fraud and is in court? 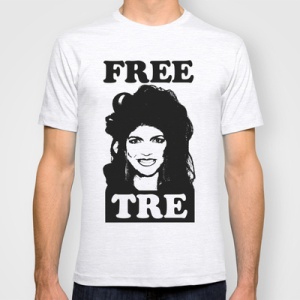 Mmrrnnngghh I just shivered with delight. And you know what makes this all worse, apart from the fact that all of the above examples are true an that someone did actually die as a result of having their dirty laundry aired on shoddily edited, partially scripted TV? There are reunion shows. That they split into three parts. Because they know I’ll watch it. And all they do is talk about all of the things that I have already watched happen. My pusher has no heart, just an insatiable desire to see my brains fall out of my ears.

First things happened, with a sceptre…

…then a wig got pulled…

…AND THEN I CLAPPED FOR JOY.

One of my professors once told me that she watches the Real Housewives because it is the only television that allows her to literally shut off her brain. Sure, that’s one reason. I put that in my back pocket for a while – my PhD and well published professor watches this dribble, too! However, this does not defend nor explain why I think this has become such a medusa of evil in the television world. And I can’t truly do either. All I can offer is the simple explanation that I just can’t help it, and I love judging these women. I do. A whole lot. And, for your solace, I never make the good doctor watch this with me. This is the drug that I save to do in private when no one is watching, and wait for the formication to kick in to know that it’s time to start another episode. I need this. I can’t stop watching it. Oh god there is a new season starting next week. HOOK IT TO MY VEINS.

So, there you have it. Reality TV at it’s worst. And now you know that the only reason that it continues to exist despite any reasonable explanation is because people actually watch it. I watch it, unabashedly [read: slightly abashed]. I can offer to you that the other women and gay men who watch Real Housewives may also know how pointless and down right awful it is and also don’t care, but this would be a lie. It’s an addiction, pure and dirty and simple. The entertainment value is low, it has little to nothing to offer in the intellectual department, but I’ll be damned if I don’t want to know who gets a glass of wine thrown in their face next.

Sometimes you wanna go – where everybody knows your naaaaame

I just figured out how to watch Athens, and I’m already drooling. Grabbing the metal spoon, this is Kitty, signing out.

I'm southern, I'm sassy, and I'm opinionated.
View all posts by Kitty →
This entry was posted in General Ranting. Bookmark the permalink.