Ahoy, chum! Cap’n Chris be out at sea makin’ ready to swash and/or buckle against scurvy dogs and freedom haters. So he asked me to be his first mate fer the day and pass on more o’ his wacky words o’ wisdom about life in Ye Olde Marine Corps. Have at ye! 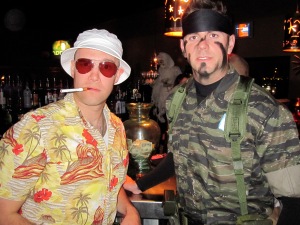 I remember when I first joined the Marine Corps back in 2007. Smart phones weren’t really a thing yet. We were still joyfully bombing countries whose chief exports are sand. Justin Bieber wasn’t the menace that he is today. The world hated America… Hmm… I guess some things don’t change. *sigh* Let’s focus on the smart phones.

Marines have a variety of ways in which we like to pass the time which is important since about 80-90% of your time is spent waiting for something. For instance, in order to jump out of an airplane one time at 4 o’clock in the afternoon, I need to wake up at 4 o’clock in the morning for some reason. After that, we get some classes, we take roll about a dozen times, we practice our procedures and check and recheck our chutes and then sit, with the harness on (very uncomfortably) for a long time waiting and waiting for the aircraft to get set up or the weather to be just right. There is no eating, sleeping, drinking, or smoking allowed once you have your harness on, so you need something to pass the time. There was a time, when I first joined, that Marines did so by playing a card game called “Spades.” These tournaments got heated as five or six Marines sat atop jerry cans of fuel, loudly swearing at each other.

The other favorite game that will be recognized by anyone who has ever served and spent any time the field (sorry Air Force, you wouldn’t get it) is the wonderful and ageless game of throwing rocks at other rocks. This is my barometer to check the boredom level of my Marines. I like to time how long we’ve been in the field before I see a Marine plop onto his butt, pick up a small rock, turning it over in his hands and contemplating whatever it is that junior Marines contemplate (I like to think it’s the finer points of theoretical physics) and then look up slowly into the middle distance with a thousand yard stare. To the uninitiated this might look like a deep meditation in which a young warrior is remembering a strong memory past. To the officer in charge, who is used to dealing with nothing but mischief from these young, well-trained deviants, it might look as if he is calculating some outrage. Then, he raises his arm and lets fly the rock in a graceful arc at a target known only to him and then slowly and quietly curses to himself as he lowers his head and begins to fish around in the dirt around his lazy, stupid ass for another rock to throw at another rock because we are idiots and this is what happens when you sign up to slay dragons and rappel upside off of skyscrapers whilst shooting a machine gun into a flaming, airborne school bus full of terrorists but instead they send you to the middle of the fucking Mojave desert for a month-long exercise and tell you that you are going to be a road guard at a random intersection and oh by the way here’s a camp stool, a radio and a jug of water we’ll see you in a month! SEMPER FI!

…Sorry. I think I blacked out. What happened? Who are you? Have I joined a cult? I got way off track. The point is that Marines used to very social ways to waste time in the midst of all that tedium. We wrestled and joked and talked and lied about things. This was the developmental crux of the experience of the military. Social interactions! Nowadays, despite the fact that my particular career has led me to places where I actually do get to do all the fun things you think about when you hear words like “special operations,” motherfuckers are on their smart phones! You know what I mean! If you are currently reading this in public surroundings, look at the people around you. I will wager a lot that 90% of the people in the place where you currently are heads downs, on their fucking phones, downloading a picture of a cat for whatever reason.

Just the other day, I was rappelling out of helicopters with my Marines. This is a very fun thing to do. It was a beautiful day right by the beach and we had machine guns and were not only rappelling and fast roping ourselves, but we were doing it with military working dogs! We were rappelling out of helicopters with machine guns and a German Shepherd dangling beneath us! As I landed on the ground, grinning like a kid because it was awesome, I looked up to see that all the Marines on the LZ were texting or facebooking. We were doing something new and innovative that was JUST invented and they are on Facebook! Apparently they are too cool for all the cool stuff going on to spare a lick of attention to it. These weren’t the special operators that I’m talking about, either. This was the truck driver who has never seen anything like this before. Meh… I’ll update my status.

The only thing worse than that is Call of Duty. When I joined, Call of Duty hadn’t come out yet. I remember when it did and people played it and commented, “Wow, this is a lot like the real thing!” Now, many, many Marines have joined because of those games and I hear, “Whoa, this is just like Call of Duty!” Earth to dipshit, the Marine Corps was here first. Gear also comes and goes in fashion, largely based on what is portrayed in these games which then is represented in the next installment in whatever series. This is art imitating life imitating idiots. It’s an M. C. Escher painting titled “What came first? The gun or of the video game?”

The End. I’m back in charge again, motherfuckers. And, personally, the first time I read through this article was on a smartphone. So nuts to you, Chris! Kisses!

By reading this blog, you legally forfeit your right to cry, eat tofu, or watch movies where people kiss in the rain and sh*t!
View all posts by Paul →
This entry was posted in 'Merica, Assholes, Gamin', Hatred, Marine Stuff, USA! USA!, Veterans, Work. Bookmark the permalink.