Kitty Reviews: Things You Should Have Already Seen

“I’m late to the party, but I have opinions about it anyway”

Warning: SPOILERS. But you should have seen this shit by now.
Ratings are not on a consistent scale, and the author notes this and does not care.

There’s a reason they left you on Earth. OOOHHH BURN.

This dystopian (arguably the most overused word to describe the setting of a book/film) interpretation of class war could have been really great if it tried harder to pick a trajectory. The movie presents a world that has split into two factions: those rich enough to live on Elysium, an orbited space station with incredibly advanced science and other wealth-privy advantages that looks down pitiless on Earth; and those who were forced to remain on poverty-ridden, apparently mostly Hispanic Earth. Matt Damon, raised by Hispanic nuns in an orphanage, tries to keep probation while pissing off robots and arriving late to work. This is supposedly the prototype of people left on Earth – impoverished, on probation, bilingual (only Spanish and English, mind you – who knows what happened to everyone else), and on the edge of collapse. After an accident at his depressing job leaves him riddled with some radioactive death sentence, his goal is to get to Elysium, where machines exist that can cure anything from exploded faces to cancer (both of which appear in the film). The problem is, he has so many opportunities where he could just hop in that machine and get cured – it takes like 10 seconds – but for some reason he just DOESN’T. He gets distracted, he has to save the love of his life’s child (and where the hell did she come from?), he decides that it’s more important to fight some larger political battle, blah blah blah. Whatever. I didn’t need him to become a hero, but if he were going to go that route, he could have at least built an army of other pissed off poor people on Earth and presented Elysium with a sizeable uprising. All in all, the movie was pointless, Jodie Foster fakes an affected accent the entire time, and some random bro ends up saving everyone on Earth after Matt Damon decides to do us a favor and kill himself. What a waste of a cool concept. Final Rating: Double Ds Dumb as Dogshit

Bridge on the River Kwai

Who’s the shirtless guy in front? No one cares, he didn’t win anything! Ah, Oscars.

Obviously, I was forced to watch this by one of our dear BroCast creators, and I’ll give you a hint – it was Paul. A triple threat Oscar winner in 1957 for Best Picture, Best Actor, and Best Director, this movie was sure to be good. And that it was. However, not typically a fan of historical movies or movies that focus on army politics or war, I was surprised that I liked it as much as I did. Alec Guinness was the real reason that I loved this film so much. Yes, I know he won an award, but I’m telling you he deserved it! Something about the sheer snarky genius of this British colonel just satisfied the hell out of me. British prisoners of war, led by Colonel Nicholson (Guiness), are instructed by the Japanese commandant to build a railway bridge over the river Kwai. After proving his loyalty to his men by enduring a very claustrophobic looking torture, Nicholson is able to get them to rally around the idea of pride in the construction of this bridge. And the end is just tragic. The movie makes you sit with this tragedy and feel incredibly sorry for the poor sod who almost died to retain his own dignity and the dignity of his men, all to have his pride shattered right before his eyes, and by his own allies. This is what I like best about a great old movie – it prides itself in the art of subtlety. People back then must have been smarter and didn’t need everything spelled out for them (THANKS OBAMA). The movie isn’t in your face with hyperbole and it doesn’t go to great lengths to explain itself, but when it wants to make a point, it makes sure you get it. Final Rating: Rated B British Accents and their ability to turn me on, regardless of the age of the actor speaking.

How to Survive a Plague 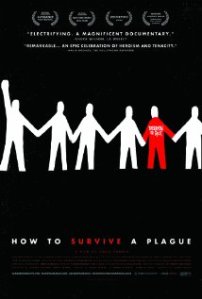 A Friend: Every time I watch this, I cry
Me: YOU WATCHED THIS MORE THAN ONCE?!

This documentary about activist groups fighting to get recognition and treatment for AIDS in the late 1980s/early 1990s was the most emotional, intriguing, and impressive documentary I have seen in a really long time. I’m a documentary nerd — I know I said I didn’t love historical movies, but I didn’t say I don’t like to be educated in historical matters; I’m just lazy. This documentary required a serious commitment on the part of the the director and cast of the film to unearth old material from years and years of archived activism meetings, demonstrations, and news footage, and their efforts did not go unnoticed. This documentary hit me hard, and I credit this to the fact that the movie was trying to prove to me that their work was not only going to make a huge difference to the gay community in the 80s, but that it was going to make a major impact on the history of AIDS around the world. Over the course of this documentary, you meet dedicated, intelligent individuals committed to finding and implementing effective treatment for themselves, their friends, and their community, and you watch them do so by any means. Black Market, illegally imported drugs from other countries, drug trials, demonstrations, interviews, research, anything. And after all of this effort, you watch some of these people die. And you watch their friends become inspired by their death. And then you watch their friends die. And then you see the child of a now dead activist crying about missing her only then 40-something year old father. And then you cry. And then you throw shit around your apartment. And then you pause the movie to go for a run. And then you force yourself to sit down and finish the film, because it’s fucking important. And that’s what this documentary is – really fucking important. If you haven’t watched it, you had better. Or I’m going to make you, and I’m going to watch you cry, too. Final Rating: 10 out of 10 which is also how many times I probably cried

So, if you haven’t, go watch Bridge on the River Kwai and How to Survive a Plague. And if you have any suggestions of things I should have already watched by now, send ’em over.

I'm southern, I'm sassy, and I'm opinionated.
View all posts by Kitty →
This entry was posted in General Ranting. Bookmark the permalink.

2 Responses to Kitty Reviews: Things You Should Have Already Seen