…So Why Don’t You Come With Me, Little Girl, On a Magic Carpet Ride?

Last Friday, the day after I posted Part I of my travel guide, somebody in Germany stumbled upon our blog by doing a Google Image search for “”horrible cut off penis#.” Seriously. Not making it up. How in the blue flipping fuck did that happen? Come on, Germany! What the hell, huh? Okay, let’s do this.

Italy – Do you like Jesus? Like, REALLY, like him? LIKE like him? Can’t get enough, need to see pictures of him and his mom everywhere, always? Maybe spiced up with a few paintings of some saints being gorily dispatched and the mummified corpses/digits/heads of some others on display? Great! Because that’s what covers roughly 87% of Italy. Yes, everybody there is wonderful and it is the best food in the world. But I can only look at a fresco of an emaciated Jewish guy getting nailed to a board in a church that smells like a flooded basement so many times before spaghetti carbonara stops being worth it.

This is not what I want to eat gelato to.

Japan – When people think of Japan, they probably picture hi-tech big cities, packed with people, constantly singing karaoke and watching truly horrifying pornography. And they’re probably right. I wouldn’t know, because I spent almost all of my time there on the tiny island of Okinawa, which is their equivalent of rural Louisiana. It’s hot, sweaty, and, thanks to the large fish processing plant, smells mostly of dead fish. The people there hate the US Military, which has several large bases on the island, but seem oblivious to the fact that when those bases relocate to Guam by 2020, their entire economy will collapse. They do have an awesome aquarium. I also spent a month training on Hokkaido where it was 32 degrees and raining in late May. So…yeah.

Is it me, or do the countries we’ve beaten in world wars get off to the weirdest shit?

Kyrgyzstan – Granted, my two visits to this country were confined to the Manas Airbase where all troops entering and leaving Afghanistan spend several days freezing, probably for tax purposes. But based on that and the fact that it’s one of those hard to spell former Soviet Republics, I can pretty much guarantee that the whole country looks like the opening to Goldeneye.

Mexico – Of all the places I’ve been, you’d probably expect this to be the one where I had the most explosive diarrhea. Nope. My bowels chugged through all of that delectable Mexican food like a champion. Sure, most of my time was spent in one of those areas that’s all resorts where there are more white people than Connecticut, but still. Go bowels!

The Netherlands – When I did my post-college Europe trip, it started with several days in Amsterdam and ended the same way. The first time, P. D. Montgomery was in charge. We saw the Van Gogh Museum, Rembrandt’s House, and the mile-long line to get into the Anne Frank House. It was a lovely city that we heartily enjoyed, full of culture and beauty. The second time we came through in the capable hands of another college friend who was actually from there. It started when he picked us up driving the wrong way down a one way street with enough cocaine on his face to powder a donut. It ended when I bought my friend Alex a blowjob for his 22nd birthday the night before we flew home. At some point in the middle we spent an entire day drinking on a boat in the canals. Their prostitutes are drop-dead gorgeous. I don’t remember much else. Loved it.

The Philippines – I ate dog here. Just wanted to get that out of the way. Had a great time. The people absolutely love America and everything is dirt cheap. On St. Patrick’s Day of 2010 (Whooo, Ireland!), two friends and I spent the night at a beachfront bar where it was about $4 for a bucket of five beers and an appetizer. We ordered that about six times and got hammered looking at the sun setting over an utterly picturesque beach. Then we stumbled back to our ship and saw our assistant ops chief throwing up all over the flight deck. Fun stuff.

It was this dog. It tasted terrible.

Singapore – This place is kinda weird. It’s like a Disneyland for adults with OCD. Everything is super-modern and there is good food and nightlife and all that, but it all feels kinda forced. Like everybody is trying to have fun without getting beaten with a bamboo rod for coughing too loud or have their wiener flicked for thinking unkind thoughts about the Dutch East India Company. In the drunken basement party that is Southeast Asia, Singapore is the guy who’s trying way too hard. 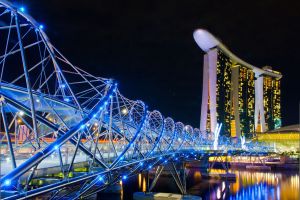 Take it down a notch, bro.

Thailand – If The Netherlands and Mexico had a baby, it would be Thailand. A blend of hedonism and beauty with poverty and all the depressing sights and smells that go with it. Yes, there are ancient temples and pristine beaches, but there are beggars everywhere and you can pay to see a woman pop a balloon by shooting a dart out of her vagina. Sure you can buy a good suit for cheap and enjoy perfect Pad Thai, but that beautiful woman at the bar could have a tallywacker bigger than yours. Definitely a great place to visit, but you’ll have the urge to douse yourself in rubbing alcohol before you go to bed every night. You probably should.

Especially if you were holding the balloon.

That’ll do it for me. Go pack a bag and hop a plane, the world awaits. Why not use this coming long weekend to go somewhere I educated you on? Do what I would do. Eat some tasty grub, have some gastrointestinal distress, drink a lot, see Jesus, and tip your hookers. And if you go to Germany, watch out for your penis.

By reading this blog, you legally forfeit your right to cry, eat tofu, or watch movies where people kiss in the rain and sh*t!
View all posts by Paul →
This entry was posted in BBQ, Breasts, childhood, Drinking, Happy Stuff, Hatred, Lists, O Brave New World..., Paul is Grumpy, SEX, Travel. Bookmark the permalink.