I Can Show You the World…

Today, on this wet, miserable Thursday, I was able to perform one of the finest and most thrilling tasks a proud American citizen can do: pay an extra sixty dollars to have my passport renewal expedited because I realized it expires right before I’m supposed to go to a foreign country in about three weeks. The bonus part was I got to walk through the rain to the nearest Post Office which, as per federal regulations, was staffed by one nice, old black lady and several dozen hateful, angry white people, and the block it was on smelled like it was paved with dead hobos. 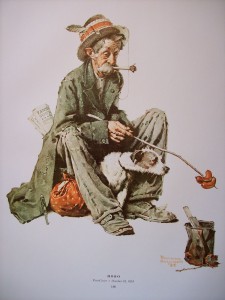 Remember, kids: hobos look like this and don’t bathe because they are poor, whereas hipsters should be shot into the sun.

The reason for my festive jaunt through the rain down 23rd Street is in just a few short weeks I will be jetting off to the ends of the earth. Primarily because I am planning on leaking the deepest, darkest secret I learned about the US Government during my time in the service. I’ll give you a hint: have you ever seen Marine Corps Commandant General James Amos and the founder of Famous Amos Cookies in the same place at the same time? Yeah, you think about that. 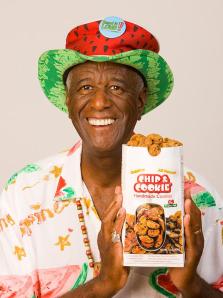 But aside from that, I also have need to travel to the lovely island nation of Australia for the wedding of former BroCast guest host and target of frequent mockery Chris “The Hairdo” Walker to the lovely rose of down undah: Russel Crowe. It should be a hoot. I will be very drunk and, if allowed to make a speech, have already written one that uses the term “frozen fuck-sicle of doom” no less than six times throughout its ninety minute duration.

The future Mr. and Mrs. Walker-Crowe.

This being my first visit to Australia, I’m very excited at the prospect of being surrounded in the sunshine by friendly blokes, beautiful sheilas, and the 28,200 different native species of beetles and weevils that reside there. But this will be far from my first trip abroad. I have traveled thither and yon across the globe from such thrilling, exotic places as Montclair, New Jersey to dangerous, mysterious locales such as Montclair, New Jersey. And now, for your benefit, I will give you my handy travel guide to the foreign countries I have had the pleasure of visiting, most of them without the use of a loaded M-4 carbine.

“I looked around, and I don’t know why, but I assure you that never, never before, did this land, this river, this jungle, the very arch of this blazing sky, appear to me so hopeless and so dark, so impenetrable to human thought, so pitiless to human weakness.”

Afghanistan – More of a business trip than a vacation, I didn’t really get a lot of time to lay back and take it all in, from the sweeping vistas of endless, hope-crushing desert to the swaths of lush greenery that sometimes extended a full fifteen feet to either side of the scenic Helmand River (Helmand being an old Pashtun word for “filled with mostly poo and some shrapnel”). Definitely a more adventurous trip for those considering it, so getting vaccinated and some Kevlar body armor before departing is highly recommended.

Austria – Now, some of you might be wondering “What, if any, are the big differences between Austria and German?” Well, let me tell you that I was about to ask you the same question. It’s smaller and has a lot less to apologize for, but that’s about it as far as I could tell. As a huge fan of the sci-fi novel Dune, I got super exited that they serve melange in their cafes, but then I found out it was just fancy coffee and not spice from the planet Arrakis. Which Austria does owe me an apology for. 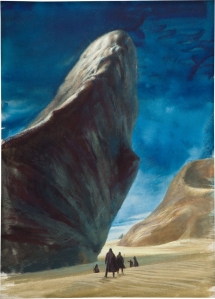 Belgium – Belgium is to France as Austria is to Germany, with one important difference: Waffles. With a capital “W.” As in “Why the fuck aren’t waffles this awesome in America?” Seriously. They also have the bar that holds the Guinness World Record for largest beer selection. I have been drunk there. Because yes.

I am NOT fucking around with these waffles!

Canada – As far as our neighbors to the north, I have only ever been to Montreal (French for “East Belgium”). I was once nearly ejected from a restaurant because I didn’t place my order in French and the large woman serving me was very angry that I, an “arrogant American” had come to her country without knowing the language. It was a Subway. She was a motherfucking Subway Sandwich Artist. That’s a hell of a high horse to be on for a SANDWICH ARTIST at an AMERICAN FAST FOOD RESTAURANT in a country where English is, in fact, one of the two official languages. So I ordered in Spanish. Because fuck her. On the other hand, the strippers are smoking hot and I had my first beer there. 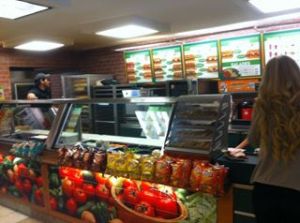 Costa Rica – This is, by far, the most beautiful place I’ve ever had crippling diarrhea for an entire day in. An entire day that was spent horseback riding through a pristine rain forest and over a volcano. Which would have been one of the most breathtaking experiences of my life, if not for the other thing.

The Czech Republic – Everybody who goes here alway raves about how great Prague is. And they do so with good reason. That town is the tits. Gorgeous city, incredibly nice people, lovely ladies, strong liquor, the works. But you probably already know that. What I am going to tell you about is the Sedlec Ossuary, which is a tiny Catholic church in the suburbs outside the town of Kutna Hora. In 1511, a half-blind monk was told (by someone fucking nuts) to begin the exhumation and stacking of skeletons from the overcrowded graveyard. They were then used to decorate the church. The bones of at least 40,000 people. Decorating the church. Do you understand? BONE CHURCH. Go there.

When I get to hell, this will be the first thing I see.

England – England is a lovely country with a great deal of amazing history and fine people who, in actuality, have pretty normal teeth (mostly). But if you want to save money, you can recreate the experience of going there by getting drunk with P. D. Montgomery under a leaky radiator. It’s the same thing.

France – It’s exactly like you think it would be. If you think that’s a good thing, you’re probably a half-baked counter-culture jagoff. If you think it’s a bad thing, you’re probably a xenophobic redneck. And you’re both wrong. The French can be snooty and self-righteous if they want to be. So the fuck what? Their food is delicious, wine is everywhere, and the rest of it you can just ignore.

Francois Hollande, President of the French Republic, at the June G8 summit in the UK.

Germany – Remember that kid in elementary school who was really mean to everyone? You know, the one who was a bully when he was little, but then everybody started growing up way faster than him. But he kept trying to be an asshole anyway, until he pushed around one of his old victims who had just had a growth spurt and started growing armpit hair. Then the kid got the ever-loving shit kicked out of him and everyone cheered. So he quickly learned to be nice, clean, friendly, and just generally tried to get everybody to forget that he used to be just the worst person. Ever know somebody like that? Yeah, Germany is that kid but with beer and sausages. Also the roof of Reichstag is very pretty at sunset.

Dawww, we can’t stay mad at you, Germany.

Ireland – when you travel to Ireland, the grey rain-curtain of this world rolls back, and all turns to silver glass. And then you see it. White shores. And beyond, a far green country under a swift sunrise. Yeah, this place is the fucking greatest. I love Ireland. And I may be biased, because it’s where me father’s fathers left many a year ago when we ran out o’ potatoes and came to Americay just ahead o’ the sasanach bullets and the hangman’s noose, but who gives a shit. This is a wonderful place for every imaginable reason. Go.

And if you’re like me, you’ll be happy to know that they don’t mind if you sing “I’ve Got a Golden Ticket” when you walk through these doors.

There you have it, the first half of my travel guide. I know it seems odd to peak so early, mentioning my favorite foreign country at the end of Part I, but that’s just the way that wacky alphabet goes. Also math. Some of you may be thinking that it sounds like I had some great times in those other countries I listed, and it’s true. But I tell you what, my first beer may have been in Canada, but you can bet your ass it came from Ireland. So keep your stupid fucking ideas to yourself.

Part II to follow next week, with a whole bunch of other dirtball countries like Italy and Vermont. See you then, chumps!

2 Responses to I Can Show You the World…