Another different type of MUTOD this week, prompted by by recent discovery of all the books I have on my shelves that I’ve never, ever actually read.

It’s a lot like I become a different person on Amazon, and I can totally buy that book, because books are justified in buying because that is totally “what I’m going to read before I go to bed.”  This, of course, is lie,  an imagined “infinite book time” that only seems to manifest itself when I’m looking at purchasing a book.

With today’s life there’s just too much tv, and every night is capped off by Daily Show, Colbert, which are always TiVo’ed and watched after 11.

But I needs me my shows fo’ bedtime!  First world problems, I’m not even going there.

So rather than complain about “how many books that I have, but I have no excuse for not reading,” I’ll take the high ground and talk about what makes books so awesome, and mention some books that you should read.

And you never will, but if there’s someone on your Facebook feed right now who’s asking The Internet what her next book should be, take a second, highlight any of the books off this list, and post it.  I don’t recommend books out loud to people anymore, because no one ever listens to those sort of recommendations anymore.  Not in the print medium anymore.

So here’s a list:  A Few Books I Read.  Ones That Really Stuck Out to Me.

In no particular order

The Road – Cormac McCarthy – 2006. Yeah, like you need me to tell you what this book is all about.  It’s The Last of Us without the monsters (and the luck).  And with no chapters, you cannot. put. this. book. down.

The Bluest Eye – Toni Morrison – The 1970’s.  A genuinely good book which, like most of these, was on the summer reading.  It’s such a sad read, and Pecola is such a tragic character.

And Then There Were None – Agatha Christie – A book whose plot device has been used in countless sitcoms as people in a hotel keep getting picked off one by one.  Christie’s book laid the foundation.  And damn is it good.

Snow Crash – Neal Stephenson – 1992.  I will just admit that I never finished.  Straight out tell you.  But I liked what I was reading.  A lot.  The concept of the internet tapped in as some sort of Metaverse (a term I’ve used on this blog before) and an interesting concept of the future.  Tell you what, if you could also bypass all that shit about the mythology of Asherah, then let me know how it ends, please? 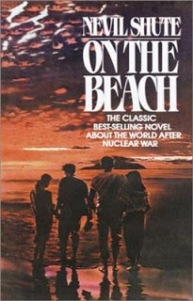 On the Beach – Nevil Shute – 1957.  Australia is the last living place on Earth as nuclear fallout crowds surround it.  So what do the people do?  Party like its the last goddamned day of their lives.  (Okay, I might be overselling it here)

Angela’s Ashes – Frank McCourt – 1996. I don’t know or care if any of his memories were bullshit, and how he knew every detail about every room he was in, but if you give him the benefit of the doubt this man’s childhood makes you feel pretty goddamn grateful about yours.

The Painted Bird – Jerzy Kosinski – 1965. Of course you knew this title would come up.  You obviously all watch the show, and Paul and I fight all the time about how this man died, but you have to imagine that his book, which features a young Gypsy boy getting accosted and confronted by the ugliest painting of Eastern Europe during World War II.  It’s graphic.

Other runners with*:  Frankenstein, L’Étranger, Slaughterhouse 5, Lord of the Flies, The Things They Carried, All Quiet on the Western Front, Brave New World, .

Okay so I need to find a way to make this “infinite book fantasy time” become a reality, because my list is way too short…and partly because it’s so late in the day.  But that’s because I was late in coming home.

*  I’m not calling them runners up, because that would just be insulting to them

Frankie “The Red Panda” Funkaducciola RIP Uncle Prime
View all posts by Eric →
This entry was posted in Lists, MUTOD and tagged And Then There Were None, books, First World Problems, Lists, MUTOD, Native Son, On the Beach, Snow Crash, The Bluest Eye, The Last of Us, The Painted Bird, The Road. Bookmark the permalink.