Good evening!  Let’s get this thing going before midnight, shall we?  My brother might be mad if I blog on his blogging day.

What a news week it’s been!

How about that SCOTUS? 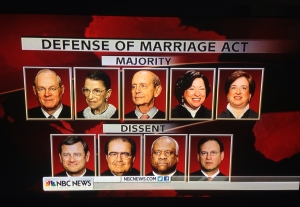 Hint: These four bottom-dwellers are pouting.

Some other people weren’t happy either:

Mike Huckabee, how do you be?  If natural selection hasn’t knocked out your strand of implausible idiocy, must it be an act of God?

These are questions for another time.  I came here to talk about someone whose story might have been lost in the SCOTUS shuffle (just picture it): Wendy Davis, everybody! On Monday the senator from Texas’ 10th district, with fellow democrats, successfully delayed the passage of Senate Bill 5, a women-hating legislative shitstain much loved by Governor Rick Perry.

Here she is in action:

“Point of Parliamentary Inquiry: Fuck you?”

“And the horse you rode in on?”

You can feel a little of the magic right here:

Davis’ filibuster lasted 10 hours (with no break to sit, lean, eat, or pee) before she was given a third strike for failing to maintain germaneness.  Or, “relevance,” for those of us who don’t like stupid words.  The three items ruled not relevant to the issue at hand were discussion of Planned Parenthood’s budget, Davis receiving help to adjust her back brace, and discussion of a Texas law mandating invasive sonograms for women seeking abortions.

Nothing to see here but government in action!

In attempt to reach the 12 AM deadline Davis’ colleagues stood again and again to make points of inquiry about procedure and rule-challenging.  The plan was this: Play dumb hard enough that the senate president’s brain melts out his ears or the clock strikes 12 and this bill becomes a pumpkin.

When this failed to prevent a vote, protestors in the gallery made a ruckus so raucous the vote could not be heard.  It wasn’t officially reported until Tuesday afternoon, following a timestamp controversy (in which republicans faked the time of day), that the vote had in fact concluded after midnight and the bill was dead.

It was a thrilling victory, but a fleeting one.  Governor Perry immediately called for a second special session beginning July 1st.  The process will repeat itself and a bill similar to SB5 will very likely pass.

Wendy Davis believes in affordable, accessible healthcare for women and she believes in the sanctity of women’s reproductive rights.  Rick Perry once incorrectly stated the legal voting age and date of the presidential election in the same sentence.  Someday, this will be funny.