People Who Can Go Fuck Themselves

I am grumpy. We all already knew that, so no big story there. And why am I so grumpy, you ask? Mostly because of stupid questions like that, you cretin. The unmitigated gall of you to ask that of me. And in such a smarmy fucking voice too. Think you’re so wonderful because you’re all sunshine and farts? Go to hell.

What the fuck are you smiling about? You’re ugly and dead. Knock it off.

However, there are a myriad of other odds and ends of life that really cheese me off. Really stick in my craw. Really angry up my blood. Really ejaculate in my curtains. And so forth. And almost all of these annoyances are variations on the theme of people choosing to be complete dickwads.

Die in a fire.

There are, naturally, the obvious groups of people who get the old hate bile churning in my gut as part of my natural inclination to rage-vomit onto their faces like a coast horned lizard shooting a stream of pressurized blood from its eyes at a predator.* You’ve got your Olympic swimmers, various racist groups, hipsters, racist hipsters, Nazis, Neo-Nazis, Grammar Nazis, people who make statements/posters comparing current political figures to Nazis, and anyone who has ever been involved in the making of any television show with the words “Real Housewives” somewhere in the title.

Die in all the fires. Ever.

But then there are the less obvious collectives of united morons that drive me up a wall of spite bricks held together with the mortar of the poop that is their souls. And they are, in no particular order, as follows:

Shut the fuck up. Please. Seriously. No activist group in the world makes me want to counteract what they do out of pure spite. I want to eat a whole bag of White Castle burgers in front of these people, then make them watch while I puke it up. I want to volunteer to inject a lab rat with a serum that could lead to a cure for cancer. I want to inject every goddamn rat until we run out of syringes and I have to cover my fists in medicine and punch it into them. Every single time I see another goddamn photo of some mutilated animal carcass pop up on my Facebook feed with some “THIS IS WHERE YOUR SANDWICH COMES FROM, MURDERERS!” caption, I want to spent a day just reposting a photo of me eating raw horse meat in Japan (it tasted awful, but so worth it).

Horse sashimi. Who could say “neigh” to that? (You’re not the only one, Lee!)

Oooh, you put naked people on billboards and have rivers of fake blood to play around in? Motherfuckers, this is 2013. You can go online and see people getting beheaded on YouTube. And type “sex” into Bing and let me know what you come up with. Who the hell do you think you’re impressing or shocking anymore? PETA are the people at the party who still think raking George W Bush across the coals makes them edgy. Not to mention if these loudmouths just put half the effort, money, and preachy celebrity bullshit into a real goddamn problem like world hunger or curing AIDS or firebombing Williamsburg, the world would be an infinitely better place. But no, I have to hear all about how I’m the next Pol Pot because I like steak and medical research breakthroughs.

Ron Swanson, you are my Oprah.

“I say, Algernon, your performance upon that velocipede was a poor as John Schrank’s attempt to assassinate Mr. Roosevelt!”

Let me be specific: I don’t mean anyone on a bike or anyone that’s ever ridden one. I grew up in the ‘burbs and, as a young lad, there’s no finer means of conveyance than the bicycle. I’m not even talking about the professional sport of cycling, which we all know is about as on the up-and-up as a 1950’s quiz show. No I refer very specifically to the grown adults in New York who ride bikes. All of them. Every. Fucking. One. They combine the smugness of Prius owners six years ago (“I guess I just decided to go green and lower my carbon footprint before the mainstream. I also shit in my window box for fertilizer.”) with everything that makes me glad parkour died out as a thing non-assholes contemplated doing. Let me elaborate. At least once a week I see some schmuck on a bike get to a red light and, as opposed to stopping with the traffic like a decent human being who appreciates that they live in a city with bike lanes to allow them to travel without getting creamed by a truck, they decide that they are actually temporary pedestrians. So they hop up on the sidewalk or plow through the crowded cross walk and usually ram into someone. And every single time they are as indignant as all get up and go. 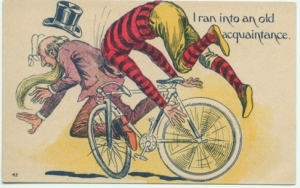 Really? It’s the person on the sidewalk you hit going twenty miles an hour’s fault? Stop at the goddamn lights and stay in the lane, you self-righteous pricks. Or we’ll give all of the road back to the cars and some fat guy from Queens will be scraping your ironic wool cap out of the grill of his cab. 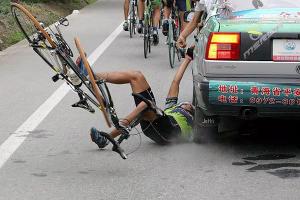 I’m not even going to dignify this horseshit with any further explanation. You all should know better by now.

Okay, so you had enough money to buy that fedora, Birkenstocks, and brand new cigarette leg jeans, but you still need to hassle me on my way to work so you can buy a veggie wrap and some American Spirit cigarettes? Take it on the arches, you leech.

Just because it’s okay for Jack Bauer doesn’t mean you get to do it.

Last weekend I was at one of my favorite bars in Washington, DC with some good friends, drinking heavily and having a good time but without hassling anyone else in the establishment. There was a guy there in a straw cowboy hat and a tank top who would scream “WHOOO FUCKING YEAH!” every time he did a shot, which was often. There was also a girl who grabbed my arm and slurred “Listen, you’re cute so you should buy me drinks. I have a boyfriend and I love him so I’ll never, ever fuck you. But buy should me drinks right now.” into my ear. Then she tried to punch my friend in the balls when he told her to leave us alone. I hope they are both in a coma now.

Anyone on the Street With a Clipboard

Listen asshole, saving the whales is great. But if you keep me from getting my buffalo chicken wrap at Lenny’s for a split second I will tear out your lungs and teach myself to play the bagpipes with them.

And, last but nowhere near least (PUN!):

“Bring me Duke Leto Atreides! And all the ham!”

You’re gross. I don’t mean big people. John Goodman is big. Melissa McCarthy is big. Dikembe Mutombo is big, but also very skinny, so irrelevant. I’m talking about FAT people. Rascal scooter fat (or anti-gravity suspensors, if you’re Baron of Giedi Prime). Lawton, Oklahoma fat. The morbidly obese. The people who can’t move under their own power without wheezing like they’re French troops at the Second Battle of Ypres.** People that sweat like a whore in a church that’s also on fire just from blinking too fast. They smell bad, block the sidewalk, make flying on airplanes a nightmare, and ensure that McDonalds never has any nuggets left when you’re shitfaced at 4am.

“I shall glut the maw of death until it is satiated with the sauce of your remaining 20 pieces boxes!”

You’re not a minority group, you’re not oppressed, and you’re not born that way. At a certain point, you cross that line from being a regular ol’ big boy/girl American into bedridden-washing-with-a-rag-on-a-stick territory. And you make that choice. Being disgusting is not like being disabled or a ginger. You choose to let yourself get that way, so I have no sympathy for you. No, I have negative sympathy. Because as of last April, obesity was costing our healthcare system $190 billion. BILLION. With a B. As in bloated. Like your worthless carcass. Go buy a bike and exercise. But stay off the fucking sidewalk.

If the phrase “rag on a stick” doesn’t immediately make you think of this image, I will never love you.

Whoo, that was cathartic. Feel much better now. Like after a day-after-drinking dump. Just letting the bad vibes out. I feel like I can go for a while without getting my grump on. I may even smile

And now the girls I sit with in my office are giggling about their stupid spin class again. Godfuckdamnitall.

**First use of poison gas in warfare. Read a book, you hillbilly.

1 Response to People Who Can Go Fuck Themselves