The Pretentious Corner: The Seven Circles of Office Jargon Hell

I had so much fun telling you all (and by you all, I mean the three people who aren’t related to Paul that read this) how to live your lives last time out, that I thought I’d do a variation on the same theme this week.

This time we’re going to delve into the depths of office jargon. I should admit right off the bat (ack! jargon!) that I don’t work in an office. I did once, for a short time, and it was enough to convince me that the cubicular world of self-hatred and fakery that is most office settings was not for me. Ever. I do, however, spend a lot of my day working with words. Thus, in the name of the sanctity of the English language, I thought I would explore and rank the most offensively vacuous terms that get thrown about in offices these days.

Consider this a survival manual for how you can come home from work every day without hating yourself. Because there may be no greater threat to the future of our great language than Ray who works on the Jergenson Account.

Before I begin, you could just skip all of this (but don’t!) and go read this excellent book by Aussie Don Watson. In it, Aussie Don lays out in much more compelling and Australian terms (like dingo!) many of the same frustrations I’ll be expressing below. What does it say about us as Americans when we need to turn to Australia to save our language? We literally own their Navy. Like, all of it.

In the name of pretentiousness, I thought I’d borrow from my boy Dante and list the offending terms by increasing levels of severity/me-wanting-to-punch-you-in-the-face-ness.

Examples: “Thinking Outside The Box” and “A Lot on My Plate”

Relatively mild but still irksome offenses. The only people who actually still use terms like these in offices are either doing it ironically or realizing as the words come out of their mouths how ridiculous they sound.  As a matter of fact, I think at this point it is actually more progressive to once again think inside the box. Return to your boxes, people.

What better weekend than this one to remind ourselves of how the Corporate world has borrowed and bastardized terms that various military outlets once used to actually mean actual things? Pretty soon you’ll all be Oscar-Mike-ing your way to lunch at Qdoba only to return and find that Capt. Paul Mooney has set your office building ablaze in the name of Major Samuel Nicholas and because AMERICA.

Examples: “Please Advise” and “See Below”

Now we’re getting somewhere. Somewhere Hellish, that is.  These are the two or three-word tags that your co-workers place at the top of emails they forward you. Their brevity is utterly poetic in its demonstration of just how few fucks they give about you and your job. Buried in those two or three words is a rant that says something like “This thing I’m forwarding you concerns you directly and/or is to do with something you were unclear about or fucked up, so I’m forwarding this to you with exactly zero elaboration because you can fucking figure it out yourself, idiot.”

Please advise. Might as well just say “Fuck You”. Same number of words and much more direct.

The Corporate world is better than any other at implying progress where none has actually occurred. Office people are kind of like little kids who just keep repeating the same word over and over again until it becomes true (I want it NOW! NOW! NOW! NOWWW!). If it has the word “forward” in it, then we must be making progress. Going forward, I think we should move forward with the idea that “forward” should be banned in all offices. Please advise.

As if “touching base” and “making good” are not offensive enough on their own, certain soulless office automatons have begun employing these verbs as nouns. To wit: “We need to have a touch-base about the make-good Charlize Theron owes us after she stiffed us at the premiere.” The phrase “touch base” is already used in a way that has little to do with its baseball origins. Turning it into a noun which essentially means “short meeting” takes it so far that… Ow. My brain.

Examples: “Enhance” and “Augment” and “Implement”

Verbs are the backbone of any language and offices have taken verbs that actually used to mean things and rendered them utterly inert. See below.

Examples: “In terms of” and “Impactful” and “Develop Strategies”

This is a 100% real sentence from a published paper at a university in Oregon (excerpted from Don the Aussie’s book):

“Third generation strategy maps have been designed to overcome the limitations that have made balanced scorecards notoriously difficult to implement… The strategy map begins with a strategic goal, is followed immediately with a strategic value proposition and ends with a cause and effect systems diagram that outlines what needs to be done to achieve results.”

Read that sentence again and try to quantify what happens to your brain when you’re reading it. Your eyes roll back into your head. Your brain shuts off. Your five senses shut down. In fact, it has all the same effects as a cyanide capsule except your mouth isn’t foaming and you’re only dead on the inside. You would be hard-pressed to find a longer string of words that manages to say absolutely nothing. NOTHING. It’s a pretty significant achievement to take little black symbols whose sole purpose is to indicate meaning and render them utterly meaningless simply by arranging them in certain ways. It’s like a fucking magic trick. A terrible, horrifying, brain-deflating magic trick. And that is what the employment of vacuous verbs and smart-ass filler phrases has done to the English language. I feel a slogan coming on:

Office Jargon: a stealthy, airborne cyanide shot to the brain. And you thought military drones were bad.

So there you have it, men. Don’t fall into these traps. Better yet, quit your office job and work somewhere that isn’t actively trying to eradicate the beauty and subtlety of the language you speak.

And if you need a reminder of just how powerful the English language can be, you need look no further than one of the bad-ass-iest Bros of all time. Here’s what he had to say, in one of the most gorgeous, economical and effective uses of the English Language ever spoken: 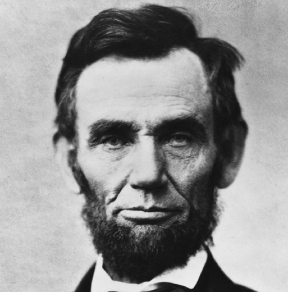 “Eighty-seven years ago our great-grandfathers and great-grandmothers built a capacity for the implementation of a new nation [partnering God] with a commitment to harnessing synergies for enhanced outcomes for all stakeholders going forward. Today we are confronting the challenge of seeing whether hopefully a country with these commitments and these synergies will still be there at the end of the day.”

Just kidding. That was Don the Aussie one last time. The lesson? If you use vacuous office jargon, you hate Abe Lincoln. And America. So don’t.

P.D. Montgomery writes a weekly column for BroCast News on all things pretentious. His interests include tweed, wool ties and Basil Hayden's - which is better than whatever bourbon you like.
View all posts by P.D. Montgomery →
This entry was posted in Uncategorized. Bookmark the permalink.